Back to News
October Pawsitive News 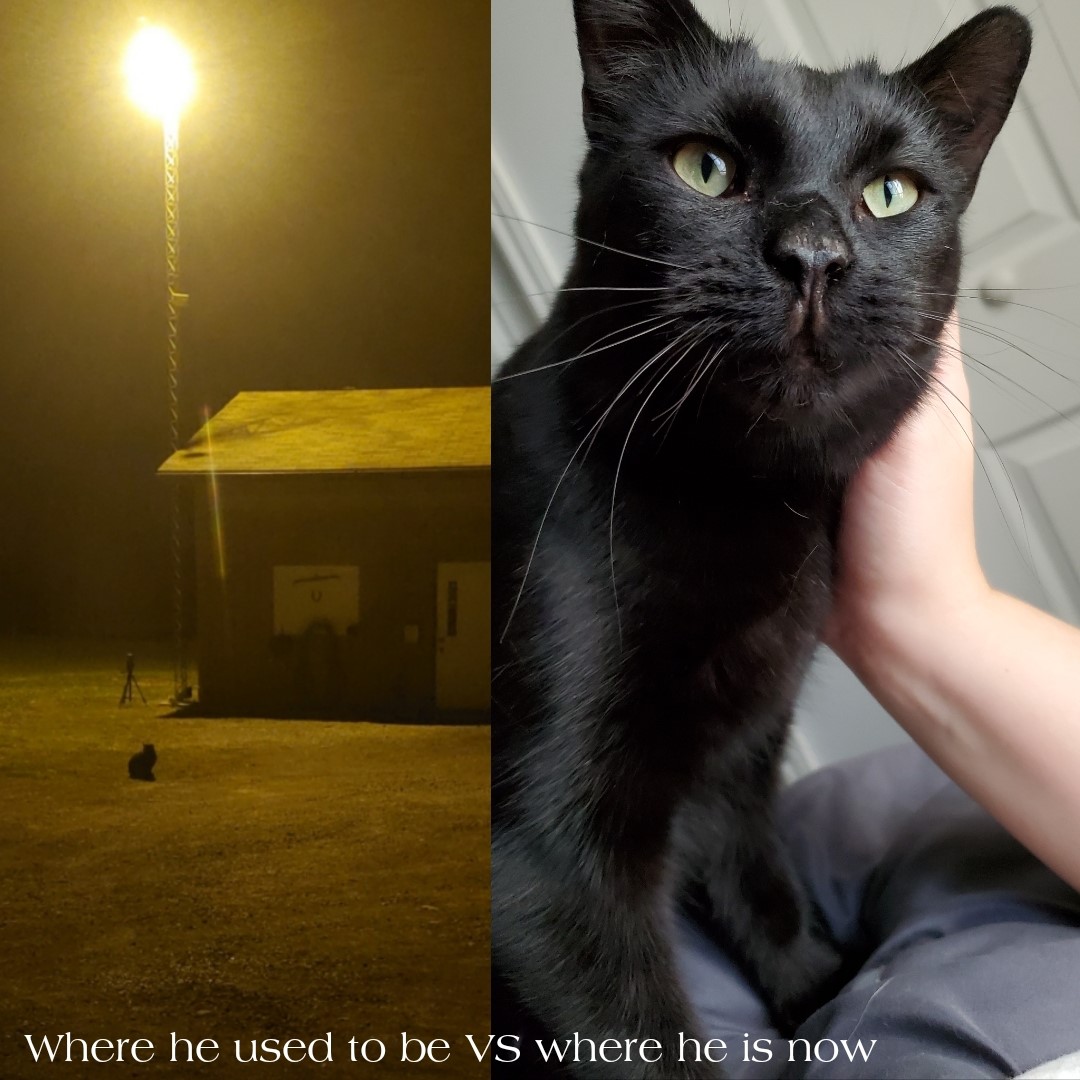 “Hi there!
Today (November 14, 2020) marks the one year anniversary of adopting two feral cats from the QHS barn cat program. I have quite the unusual update for you! It is a little long but well worth the read (I tried to shorten the details as much as possible).

We named our feral cats Chance and Alpha. I estimated they were around a year old when we adopted them (adults but not seniors). I kept them in our workshop over the winter months when I first got them in November 2019. This was to give me the opportunity to work with them and also to avoid releasing them to a property they are unfamiliar with in the cold, harsher season. Thankfully my husband is the type of guy willing to give up his workshop until the cats were released. I am a cat lover so I couldn't resist trying to get them to warm up to me. I didn't expect any miracles but if they could at least not hide when they saw me, it would be beneficial for when they were let outside in the spring. When they were first brought home, they were so terrified of me they couldn't even make eye contact. I spent many evenings out in the workshop with them, trying to get them to engage in toys and getting them to eventually eat wet food from a bowl I was holding with my hand. I worked at their comfort level and very slowly made small milestones.

In March 2020, as the worst of the winter weather came to an end, I let them out of the workshop and they gained access to our beautiful 7-acre property - their new home. It went well for a while. Alpha was harder to spot once they were let out but we set up cameras in the workshop where their food was to make sure they were both sticking around. They began to favour our large, covered porch so I started feeding them the wet food there in the evenings to keep that routine going. Chance was always there eager for his wet food. Alpha was harder to spot and sometimes I had to leave and watch from inside before he would venture out.

At the end of April, six weeks after we had released Alpha and Chance from the workshop, Alpha went missing. We noticed his absence from Chance's behaviour that suddenly changed. Chance started to spend all day on our covered porch, crying a lot. We knew something was wrong. It wasn't unusual to not see Alpha as he was more shy around us, but with Chance's behaviour I knew in my gut that he had gone missing. It was a tough two and a half weeks that followed while we waited to see if Alpha would come back. Chance spent that time helplessly crying at our windows and doors and spending all his time close to the house on our porch. I cried with him. I went looking everywhere for the worst case scenario - Alpha's deceased body. I never found anything. Finally, I couldn't take it for even one more day after waiting two and a half weeks. I developed a six-part plan to ultimately attempt to get Chance into our home. He was bonded with Alpha and although we didn't know much of his background, we knew that the two of them came from a colony of feral cats. So it made sense to me that after losing Alpha, he was scared and lonely and looking to us (and the three cats we already had in our home). The plan went like this:

1. I used wet food to get Chance back into the workshop and kept him in there for an isolation period to make sure he had no ticks on him for the next steps in the plan. He was in there for a ten day period with great success.

2. I used Chance's recent desire to come into our home, and his love of wet food, to get him into our mudroom. It is a bit of a long story but with the help of my husband, it worked. I kept him in our mudroom for a total period of three weeks. During this period of time, I worked with him daily to try to get him to warm up to me. It was set up so that our three cats and dog inside could smell and see Chance and vise versa, but they were separated by a wire fencing that my husband rigged up. This was to get everyone acquainted within our home.

3. During the mudroom step, I fed all the cats wet food together. Chance on the inside of the mud room and our three indoor cats on the other side. They could see and smell each other through the wire fencing while they ate.

4. Near the end of the mudroom phase, I began bringing our pets inside the mudroom to meet Chance one at a time, supervised. This happened for very short periods of time and involved treats and more wet food. Once everyone had met and there were no fights, I moved onto phase five.

5. I let Chance into our house at this point during the day, locking him back up into the mudroom overnight when we couldn't keep watch of everyone and their interactions. I did this routine for two and a half weeks. Things went surprisingly well with minor disagreements and no real fights between the cats. It was very clear that Chance loves other felines and missed their company.

6. The final phase happened after Chance had been allowed in the house fully and he was slowly weaned away from the mudroom being his safely net. This brings us to July of this year. This phase involved trying to desensitize Chance to my touch. I worked with him a lot, every single day. I worked at his own pace, never pushing. While he was eating treats, I would quickly touch him then take my hand away. Then slowly it evolved into a quick touch with a petting motion. The goal was to associate petting with a good experience - receiving and eating treats.

Fast forward nine weeks of that last phase and in September of this year I had a huge breakthrough. I could, carefully, pet Chance. Really pet him. I felt like weeping tears of joy. He finally began opening up and accepting my love.

He remains quite a sassy boy and getting close to him requires a lot of respect. I accepted from the start that I may never touch this cat...so to have come this far is so special. This is a cat who couldn't even look at me when he was first brought home.

Flash forward to present day and Chance is doing AMAZING. He doesn't beg to go back outside as we feared he might. Instead, he sits on our window sills next to our indoor cats and watches birds with them in silence. He has bonded with our indoor male cat, Polar. He gets along well with all our cats and our Labrador Retriever, Mara. He doesn't quite trust our dog fully but our dog is very behaved with cats so their relationship can only get better. As far as Chance and I go:
- he purrs when I pet him
- he sleeps in our bed sometimes
- he follows me around when he wants attention
- he loves it when I give him rub downs and bum scratches
- he lays in my lap for short bursts of time while I watch TV
- he takes treats from my hand (I can't remember the last time my hand was a victim to a warning scratch from him)
- he comes when I call his name

We adore each other. We have a special bond. All the stress and effort was worth it. All the late, chilly nights spent with him and Alpha in the shop last winter. All the tears when Alpha went missing. I would do it all again because although we may never know what happened to Alpha, we saved Chance. He is safe. He isn't lonely. He is inside. He is fed. He has a family.  All he needed, was a chance.”

During the month of October, we had 148 animals come into our care. We received 109 cats, 27 dogs, 7 hamsters, 4 rabbits and 1 lizard. We adopted out 58 cats, 10 dogs and 3 hamsters. We returned 5 cats and 17 dogs to their owners. We also transferred out 68 animals to other like minded shelters and rescue organizations. The rest of the animals will stay with us until they find their furever home.

Thankfully, the majority of us haven’t experienced a global pandemic in our lifetime. Life as we know it has changed drastically for many, and the future is uncertain. During challenging times, or times when we experience things that are very much out of our control, people have often looked to animals for comfort, as well as a sense of purpose.

What better time to sign up as a foster family for the Quinte Humane Society? Foster Families provide a vital service to the animals in our care. Whether it be an animal that requires a quiet and comfortable place to recover from extensive surgery, a nursing mother seeking a quiet place to raise her young, or the shy, nervous cat or dog that is continued to be overlooked for adoption, because of its reserved nature. Are you intrigued? Are you willing to offer your home, time and most importantly love and understanding to the many homeless animals of the Quinte Region?

Sign up as a Foster Family today, it is truly one of our most rewarding volunteer opportunities. 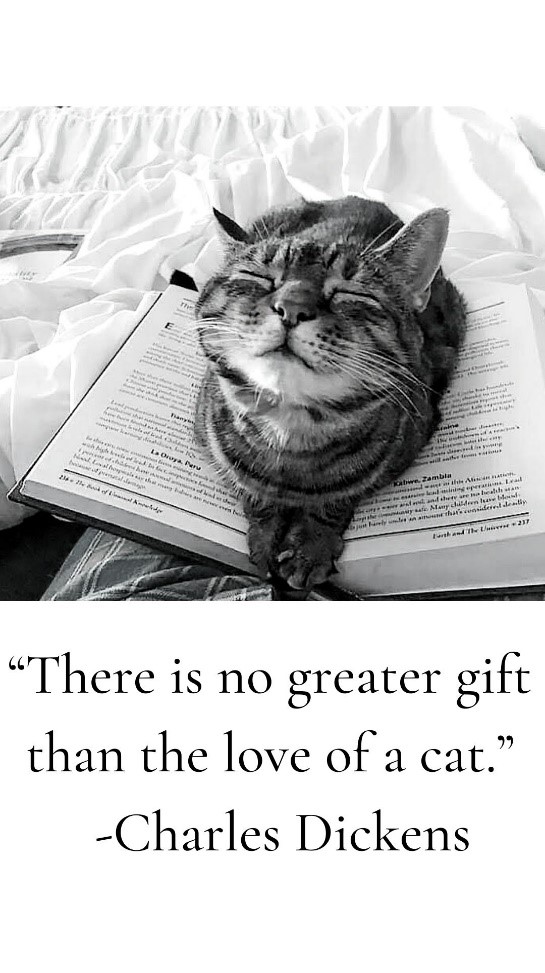